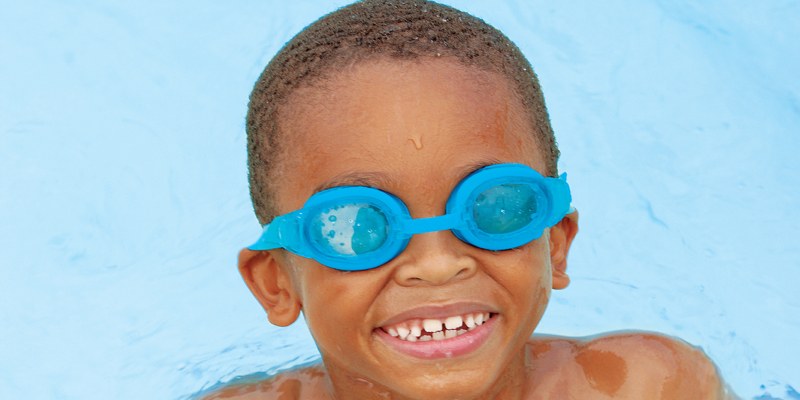 In the article, Krista Johnson says:

In the early 1950s, Montgomery resident John Oliver said he had two options if he wanted to go swimming: the pool at what was then known as Alabama State College for Negroes or the pool in Madison Park.

While more public pools existed in those days, African-Americans weren’t allowed in most. When segregation laws were challenged nationally, the city responded by closing its public pools, such as Oak Park’s, rather than allowing black children in them. Thankfully, Oliver said, that same year construction of the Cleveland Avenue Y began.

Opened in 1960, the historic Y was across the street from Oliver’s family home on what is now Rosa L. Parks Avenue. It was the place where, at age 10, he learned how to swim, progressing from the beginner classes called “minnow” to the advance “shark” group.

“Before this pool, I did my swimming in the bath tub,” Oliver recalled.

Today, Oliver, 67, serves as a YMCA program director and the branch’s unofficial historian.

Naming off the locations prior to Cleveland Avenue, his knowledge on the YMCA’s importance to the black community runs deep. The city’s first YMCA for African-Americans, Oliver explained, was opened in 1949 but did not have a pool.

To build the new facility on Cleveland Avenue, community members were tasked with raising $50,000. After collecting $30,000 — a significant accomplishment in the 1950s — the other $20,000 needed was donated by the Montgomery Improvement Association, headed then by Martin Luther King Jr.

Construction of the branch’s pool gave African-American children in west Montgomery a haven for 10 weeks in the summer. Oliver remembers spending several summer evenings in the Cleveland Avenue Y’s pool with his parents and brother.

Since opening, generations of families have continued to learn to swim in the branch’s pool during the summer months, including Nicole Williams who attended the branch’s summer camp for several years as a child and now sends her daughter, Kirlan-Loryn Williams, to it.

With plans to open a new indoor pool, the branch hopes to provide even more Montgomery children that same chance by offering classes year-round.

The importance of swimming is about more than giving children the chance to enjoy themselves, Cleveland Avenue branch Executive Director Darryl Woods said, it’s about making sure they are safe, too.

Of the 250 kids to participate in the branch’s 2018 summer camp, only about 50 knew how to swim when they arrived. By the end of the summer, that number had risen to between 80 and 90, but that isn’t representative of children not being able to learn in the 10 weeks, but of the fact that many would not get in the water to try, Woods said.

He and other Cleveland Avenue Y employees believe there is a direct correlation to the number of children who don’t know how to swim and the historically low level of access to swimming pools in Montgomery for the African-American community.

As a mother, Williams wanted her daughter to follow in her footsteps of learning to swim and thought the Cleveland Avenue Y was the perfect place for it.

“Its important to learn how to swim because you never know what kind of situation your child will be in when you’re not around,” she said, adding that she appreciates the branch’s staff “teach the kids about a lot of the history that has walked the halls at the Cleveland Avenue Y.”

As far as the new pool, “I’m very excited, but at the same time kind of sad,” she said. “We have memories with the old pool, but it is really nice to see them getting a new facility for the kids that are there now.”

The Cleveland Avenue YMCA is raising $350,000, its share of a larger capital campaign to build an indoor pool there, expanding its swim lessons year-round